Cricket for life for O'Connor 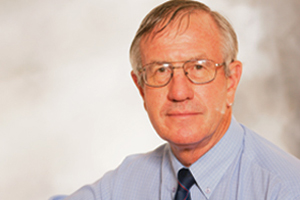 Emeritus Professor Cyril O'Connor's hand in the unification of cricket and his long service to the sport have earned him a lifetime membership of the Western Province Cricket Association (WPCA).

O'Connor, of the Centre for Minerals Research at UCT, was elected to the position along with Advocate Norman Arendse, the former Cricket South Africa president and now president of the Cape Town region of the South African Football Association. WPCA allows for nine life members at any given time, and the election of the two has pushed the number to seven.

O'Connor (in picture) spent a full 24 years on the WPCA executive. As a member of the former white cricket union, he took part in the unification talks between his organisation and the Coloured/Black Cricket Board in 1990 and 1991.

"My portfolio over many years was development, and this involved the whole issue of taking cricket into the townships," he explains.

O'Connor has not been involved in cricket at UCT, though, but has recently been invited by the UCT Cricket Club to assume the role of honourable president, and to assist the club in whatever way possible.

He is not a big fan of the newly-introduced Twenty20 series, however.

"There's no comparison between the enthralling pleasure of a cliffhanger five-day test and the made-for-TV Twenty20," he notes.