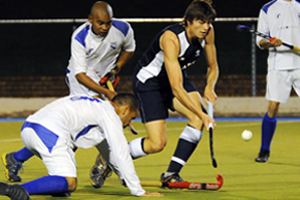 Eye on the ball: Mike Heyink gets away from Central's Lazario Brown (back) and Neil Davids in UCT's title-clinching win.

It was a nervy and sometimes sloppy affair, but in the end the UCT men's 2-1 win over Central on 3 September was more than enough to help them clinch the Western Province Hockey Union Grand Challenge trophy - the team's first championship victory since 2004.

Going into the match, the title was UCT's to lose - even with archrivals Stellenbosch University breathing down their neck, a win, a draw, or even a defeat (if by no more than one goal) would have been enough to settle matters in their favour. They got off to a bright enough start, dominating the early stretch of the game and deservedly taking the lead about midway into the first half.

But then they took the foot off the gas, allowing Central back into the game. Central would continue to press in the second half, and their equaliser came as no surprise as holes began to open up in the UCT defence. The goal was just the jolt UCT needed, and the team picked up their game and scored late into the half. That took the wind out of Central's sails, and UCT was hardly stretched as they held on for the final whistle.

"I'm really proud of these boys," said a visibly chuffed coach, Craig Sieben, after the match. "This was really one of the best-contested Grand Challenges for a long time." 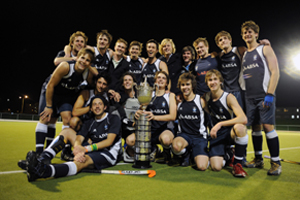 While UCT had been competitive in recent years, they weren't quite good enough to match Stellenbosch or some of the other teams. But a close finish in 2009 put some fire in their bellies. "We just said that things have got to change," said Sieben. With a more settled side - they hardly lost a player over the off-season - things finally panned out.

But Sieben knows that UCT will be the side with the target on its back next year. "Winning the title for one year means nothing; we have to perform again next year." With only two players likely to leave the squad over the coming months, Sieben is confident UCT can again fend off any challenge in 2011.