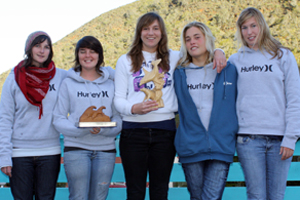 That was thanks in large part to the respective first and third sports for Sarah Nicholson and Kerri Hodgkinson, with rivals from Stellenbosch University and NMMU finishing in second and fourth place respectively. The result would have been especially pleasing to Nicholson, who finished third in 2009.

Cold winds and rain made the event a nightmare for spectators, but provided good waves for the surfers, reports Nic Pringle of the UCT Surfing Club. "It was probably the best waves we've even seen at the competition," says Pringle.

And while the men would've liked to have done better - they have in recent years taken honours - the level of the competition, with some of the country's top surfers taking part, suggests that UCT did very well, Pringle adds.