Fun and knowledge at maths afternoon 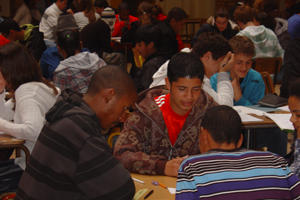 As the public servants strike continued, scores of high school learners descended on UCT to sharpen their skills at the popular Mathematics Afternoon.

The 200 grades 10 and 11 learners, some from as far afield as Bredasdorp and Mossel Bay, enjoyed a mix of lectures on topics outside the school curriculum, competitions, and maths videos. The event is free to learners.

The brainchild of Professor Christopher Gilmour in UCT's Department of Mathematics and Applied Mathematics, Maths Afternoons have been hosted twice a year since 1987. Gilmour was assisted by Emeritus Professor John Webb, Dr Jurie Conradie and a team of students to organise the latest event on 28 August.

Gilmour explains that although the emphasis was on fun, learners were exposed to topics in a way that was not only entertaining, but also gave them insight into the nature of mathematics, its challenges and uses, as well as its appeal to school learners.

"Many of those who have attended in the past have come to UCT and have excelled in their studies," Gilmour said.

As usual, Coca-Cola sponsored the event with liquid refreshments.