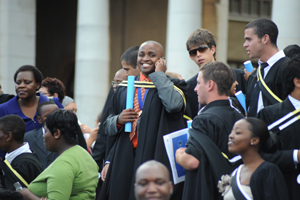 Calling the future: An HSRC study pointed to some worrying contrasts between the employment rates of African and white graduates.

The finding in a recent study that even African graduates who have graduated from historically white universities (HWI) are less likely to find employment than their white counterparts is somewhat unexpected, says UCT's Professor Haroon Bhorat.

Speaking at the first of the revived Open Planning Forums of the Institutional Planning Department on 30 August, Bhorat and Natasha Mayet, both of the Development and Policy Research Unit (DPRU), drew attention to some of the highlights from a 2009 Human Sciences Research Council (HSRC) study on student retention and graduation destination, particularly a section conducted by the IPD.

That research looked at what happened to some 5 491 students who had graduated across seven South African universities, including HWIs and historically black institutions (HBI), at the end of 2002. (UCT did not form part of the study.)

In keeping with recent trends, researchers found that, overall, 66% of white students in this cohort had graduated by 2002, far more than the 39% of Africans. Or that African non-completion rates are significantly higher at HBIs (62%) than at HWIs (37%), particularly for African women (71%).

"The notion persists that if you control for a range of variables, including household and parental effects, Africans who go through the same degree, the same course of study and at the same institution as whites, have a lower probability of finding employment," Bhorat cautiously pointed out.

That said, the study had many shortcomings, he noted. It was at best a once-off snapshot, and more universities would need to be included in a future study to see if these trends persist. (IPD's Jane Hendry reported, for example, that African graduates from UCT are more likely to find employment than their white classmates.)

Download the full report of the HSRC study, published by HSRC Press as Student Retention and Graduate Destination: Higher education and labour market access and success.