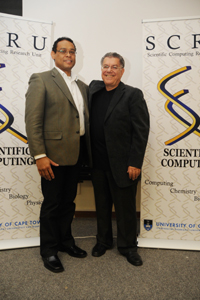 Director of the Lize Meitner-Minerva Centre for Computational Quantum Chemistry at the Hebrew University of Jerusalem in Israel, Shaik delivered a number of lectures and hosted hands-on sessions during his four-day visit.

A relatively new discipline, a precise definition of computational science is yet to be agreed upon. But in lay terms, the field involves methods for using supercomputers to study scientific problems, complementing both theory and experimentation components in a scientific investigation.

"The idea is to have prominent people in the field visit UCT to interact with both students and staff," said Naidoo.

Shaik presented a public lecture to undergraduate chemistry students on 23 August, titled Chemistry: A central pillar of human culture, and a special lecture aimed at academic staff and postgraduates, titled Cytochrome P450 and its Reactivity Patterns: What a versatile catalyst!, on 24 August.