Music college to strut its stuff at centenary concerts 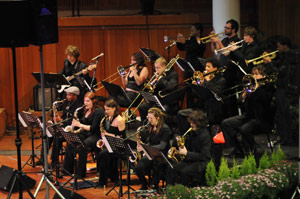 From meagre beginnings in Strand Street in the city in 1910 - and an intake of only six students - the South African College of Music has grown to become one of the country's premier music schools. To mark its centenary year, the college will showcase various music genres - from jazz to African music, world music and Western classic music - with a concert series that will run until 7 September.

On 21 August Mike Campbell and the UCT Big Band opens the SA College of Music Centenary festival in the Baxter Concert Hall with a tribute to Count Basie, the Count Basie Birthday Bash. The series will end with a flourish at the Cape Town City Hall with Francois du Toit playing a Mozart Piano Concerto with the UCT Symphony Orchestra, conducted by Bernhard Gueller.

The SACM was founded by a group of musicians, led by Madame Apolline Niay-Darroll with a half dozen students. In 1912, the English composer, WH Bell, became principal. Two years later the college moved to Stal Plein and in 1920 Bell became professor of music.

In 1923 the college was incorporated into the university. Many renowned artists have graduated from the college, more recently soprano Pretty Yende, now studying at La Scalla, pianist James Baillieu, a junior fellow at the Royal Academy of Music in London, and Golda Schultz, a postgraduate student at Juilliard.

For the full programme of concerts, please visit the South African College of Music website.

Book through Computicket, Shoprite Checkers, or at the door 45 minutes before the start.