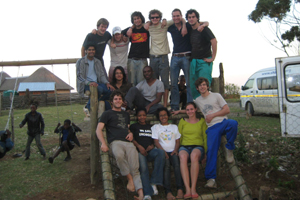 Making the best use of the drawn-out mid-year break, the UCT branch of Engineers Without Borders, EWB UCT, partnered with the Students' Health and Welfare Centres Organisation (SHAWCO) to develop and install rainwater-harvesting tanks, including filtration systems, at Zithulele Hospital in rural Eastern Cape.

SHAWCO Health makes annual trips with medical students to run clinics at the hospital - started by a troupe of UCT graduates (read more on page 8 of the UCT News Alumni Magazine) - and the surrounding area. This year they joined forces with EWB UCT to provide a back-up water-supply system for the hospital.

The hospital's current piped connection is intermittent, and the water can at times be muddy, making it unsuitable for drinking by patients and staff.

In response, an EWB UCT team of 15 undergraduate and postgraduate students explored a number of treatment and storage solutions. That sorted, they and 25 medical students headed for the Eastern Cape.

Working to tight deadlines over two weeks from late June to early July, the engineering students installed, in just six days, three water tanks that collect water from the roofs of the hospital wards. The clever team also developed devices for each tank to decant dirty water after the first rains, and filters were added to the outlet taps of the tanks to make sure the water's good enough for drinking. 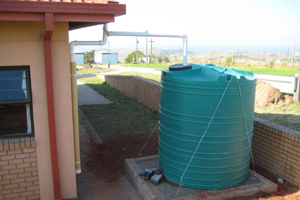 The tanks (left) have a total capacity of 15 000 litres of drinking water, and the hospital enjoyed the benefits of the tanks after the first rains.

But the students were not done just yet. In response to another request from Zithulele, EWB UCT also built a jungle gym - including swings, a seesaw, climbing nets and decks, and a sand pit - at a pre-school next to the hospital, and carried out simple electrical repair work at two satellite clinics and the visitor's accommodation quarters.

The projects kick-started what will hopefully be a long and fruitful collaboration between EWB UCT and SHAWCO Health, but also with the Jabulani Foundation, a non-profit organisation that supports the Zithulele Hospital and its surrounding community.