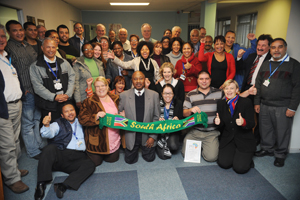 Staff of the Properties & Services Department were surprised by a special guest, deputy vice-chancellor Professor Thandabantu Nhlapo (middle in picture), who called to congratulate them on scooping the university's African Dress Competition, this for the colourful attire they donned on Africa Day, during UCT's Celebrating Africa programme.

They could have won an award for team spirit too. Their competition photograph, taken by Justin de Klerk, captured the spirit of Africa Day, and in particular both the themes of Celebrating Africa and African Connections, said the organisers.

"One can actually identify a number of African origins in the attire chosen by members of the group, and the total effect is quite a pleasing image of the UCT we hope to see in the future," noted Nan Warner of the International Academic Programmes Office, who was among the competition organisers, and who accompanied Nhlapo.

The competition was part of UCT's Celebrating Africa programme of lectures, exhibitions, discussions and events that celebrated UCT's African heritage and its growing connections with other African universities. People all over campus put on their most eye-catching African dress, persuaded colleagues to take pictures and entered the university-wide competition.