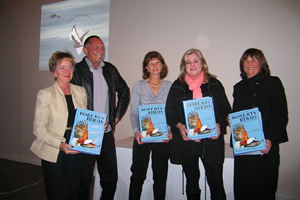 The 26 July event was also used to raise funds for part of the institute's 50th anniversary annual general meeting, scheduled for 11 August, and marked the initiation of a new birding relationship between the institute and the Steenberg Golf Club.

In their relationship, the golf club will establish an internal bird club that the institute will help to run by taking field outings there, offering students' presentations and by producing a bird-list leaflet for the club.

At the golf day, 48 golfers participated, notching up an impressive 146 birdies and three eagles between them. Prizes were awarded for the top five four-balls, three closest to the pins, and one for the longest drive. The winning four-ball (pictured below) each received a signed copy of the VIIth edition of Roberts' Birds of Southern Africa - the most comprehensive handbook on birds of any region in the world. The book was compiled by the Fitztitute. 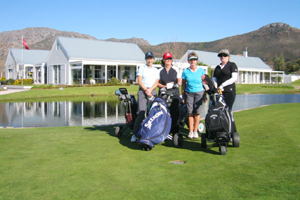 Project leader, Dr Rob Little, thanked the Steenberg Estate's Gary Lees and Ian Kennedy for hosting the event, as well as sponsors Sherry's Antiques, Naughton's Flight Wines, Excelsior Wines, Pick n Pay, Black Oystercatcher Wines and UCT. Little expressed his gratitude to all the golfers that made the day "a fabulous success" and encouraged them to act as ambassadors for the institute during the remainder of 2010, and beyond.