Specialist a hero to support group 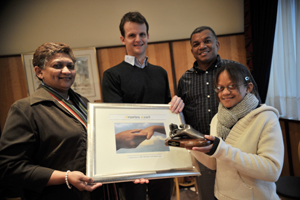 Gail Daniels could not heap enough praise on Dr Peter Nourse when the Cystinosis Support Group - which she started three months ago after a gentle prod from Nourse - presented him with an award for service and compassion.

It's not that hard to grasp Daniels' lavish tributes. Her 16-year-old daughter Danielle suffers from a rare disease of the kidney known as cystinosis. After years of being passed from pillar to post by one hospital and doctor after the other, she finally found a patient ear and the right knowledge in Nourse. It was he who first diagnosed Danielle, and suggested treatment. These days he also serves as medical advisor to the support group.

"It's nothing but a blessing to have a doctor who cares, who listens, and who empathises," said Daniels when the group, in collaboration with the international Cystinosis Foundation and the Western Cape Department of Health, made the award to Nourse.

A paediatric nephrologist at Red Cross Children's Hospital with a joint appointment in UCT's Division of Paediatric Medicine, Nourse first came across cystinosis while doing a fellowship in the Netherlands a few years ago. But cystinosis appears to be but one of many rare diseases - only some 2 000 people have been diagnosed with cystinosis across the globe - that can afflict the kidney, he reports.

Cystinosis, specifically, is a genetic metabolic disease affecting mainly children, and causes the build-up of an amino acid, cystine, in various organs of the body, such as the kidneys, eyes, liver, muscles, pancreas, brain and white blood cells. Without proper treatment, children with cystinosis develop end-stage kidney failure before age 10.

Despite being singled out for acclaim, Nourse credits the teams he had been working with at Tygerberg - his previous home base - and Red Cross. And with the growing number of children in the Western Cape appearing to suffer from cystinosis, based on the number of patients on dialysis and who have had transplants, there may well be grounds for a research project or two into the disease.

Nourse, in turn, praised Daniels and the newfound Cystinosis Support Group, which proves useful for patients, caregivers and the medical profession. "A parents' support group is important to doctors as well, especially because often the family know more than the doctors," Nourse says.