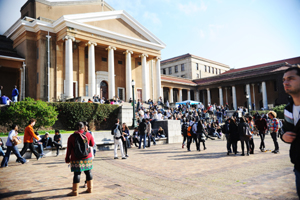 Back to basics: The campus was crowded again yesterday as students return following a long winter vacation.

It was back to old routines yesterday when UCT students returned to lecture rooms following an extraordinarily long six-week winter vacation, thanks, in part, to the 2010 Soccer World Cup. So everyone had the first-day blues, as student Lorraine Netshivhambe puts it, with long-separated classmates hugging one another.

Netshivhambe said the holiday was long enough for her to clear her mind, and she was excited to be back. While on holiday, she got a casual job, went to the soccer and spent time with family and friends.

Computer science student Mekondjo Angula said the return to varsity was both pleasing and nerve-wracking. "I'm excited to see my friends, but also nervous about my academic work," he explained. Because of the long vacation, a lot of work was crammed into the first semester, and that did not go down well with Angula. "I would rather have a long semester than a long vacation."

For Nicholas Waters, the first day after vacation was not that great. Although he kept on studying, he had an "excellent" World Cup, visiting the fan park and watching a lot of soccer - things that he wished would last for ever.

There was no time to rest for Dylan Reynolds as he had a winter course to attend. But suddenly the campus was much more crowded than it was over the past weeks.