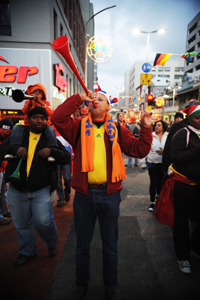 Blowing SA's vuvuzela: In assessing the impact of the World Cup on Cape Town, David Maralack will have some match-day experience to fall back on.

Hosting major sport events in South Africa, and Cape Town in particular, is playing an increasingly significant role in building 'Brand South Africa' internationally. This according to UCT's David Maralack, course convener of the Postgraduate Diploma in Sport Management programme at the School of Management Studies.

Maralack recently joined the 2010 FIFA World Cup research hub, an initiative of the City of Cape Town in partnership with the Cape Higher Education Consortium (CHEC) - made up of UCT, the Cape Peninsula University of Technology, Stellenbosch University and the University of the Western Cape - launched on 23 June. The hub sets out to assess the socio-economic impact, on Cape Town and its people, of hosting the World Cup and other mega sporting events.

The work of the research team will include over 3 000 visitor surveys and surveys on residents and businesses prior to the event. Over 50 CHEC fieldworkers and data capturers from the CHEC member universities are involved, and they have been supported by about 40 student volunteers from universities in the US and Finland.

Research is ongoing, and initial feedback is likely to be consolidated during September and October 2010 for reporting to decision makers.

Researchers will look at a range of markers, from policy and legislation to the number of temporary and permanent jobs created; from the value of public and private investment to the perceptions of successes and failures of hosting the event; from sponsorship to sport development programmes.

"Sport has become a key platform to market South Africa and highlight opportunities for global investment," says Maralack. "Initial feedback of World Cup 2010 in Cape Town indicates that the positive impacts have surpassed local and international expectations." So much so that it's now being touted as a blueprint for future sporting spectacles in the country.

"It is ironic that the success of the tournament and growth in Brand South Africa has became so huge that it is anecdotally being mentioned as a Plan B for other mega events, and that Cape Town or Durban should bid for the Olympic Games," says Maralack.

But let's not get too ahead of ourselves, he cautions.

"Whilst we should rightfully be proud of the growing positive sentiment, we should not permit decisions to be made emotionally. Adequate research and impact assessments become vital."

The research hub itself is generating its own impacts, such as the value for teaching sport and sport management and engaging students in research, says Maralack.