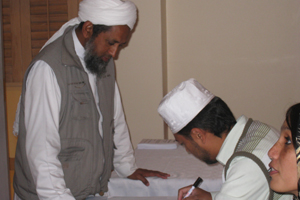 Debating the deadlock: Attending the Centre for Contemporary Islam's workshop were (from left) Moulana Abdul Khaliq Allie of the Muslim Judicial Council, PhD researcher Dawood Terreblanche, and Nabowayah Kafaar of the CCI.

The perceived deadlock on the proposed Bill to recognise Muslim marriages conducted according to Muslim rites came under the spotlight at a workshop hosted by UCT's Centre for Contemporary Islam (CCI) on 22 May.

Guest speaker Rosiedah Shaboddien argued that Islamic Shariah arrangements in South Africa had failed women, as most clerics used the tradition selectively, ignoring its provisions for the rights of women. For example, said Shaboddien, South African practice discouraged women to demand marriage contracts that can stipulate limitations, such as preventing men from marrying a second wife without the first's permission, or granting women the right to divorce.

Dr Munir Farid noted that tradition ignored rights violations, but argued that the Shariah was continually changing. Farid suggested there was room for change within tradition.

Hoodah Abrahams-Fayker of the Women's Legal Centre said that the steady stream of Muslim women who approached the centre for help indicated that Muslim mediation institutions were lacking. Abrahams-Fayker said the centre challenged the Ministry to stop procrastinating on the issue, and argued that there was no need to have a perfect piece of legislation acceptable to all, as amendments could be made based on specific experiences.