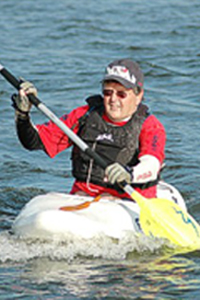 When it comes to research, Dr Kevin Winter, of UCT's Department of Environmental and Geographical Sciences, believes in the hands-on approach. So much so that he recently paddled the length (if not the breadth) of the Peninsula's labyrinth of canals, vleis and rivers, all in a bid to raise awareness to the environmental conditions of these important waterways.

According to Winter, there is no record of anyone paddling across the entire Peninsula, from Sunrise beach, on the Indian Ocean, to Woodstock beach on the Atlantic, at least not on the City's modern waterways.

The expedition team comprised four social and environmental activists (pictured below) - Thomas Cousins, Trevor Johnston, Alistar Lee and Winter - who followed waterways flowing through some of the most affected watersheds in the city: those that have been canalised, those where water quality is compromised, and in areas where communities are most affected by poverty and the effects of a rising water table.

Apart from being the first to paddle from coast to coast, the main purpose of the mission was to draw attention to the need to transform Cape Town's waterways, says Winter. 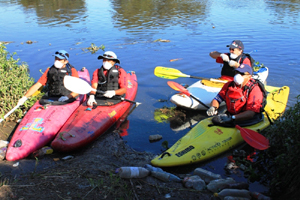 "Environmental action is urgently needed to bring canals and rivers back into the centre of city life. They are the vital arteries that can help make Cape Town a healthy city."

"Such transformation requires individuals, communities, industry and politicians to take on our rivers as an urgent responsibility. If you want to know about the environmental health of a city, just look at the state of its waterways."

The venture took 11 hours, but a good deal of time was spent talking to individuals and members of various community groups, such as Friends of the Liesbeek, Zandvliet Trust and Zoarvlei.

Public response and interest from the city has been the most positive outcome thus far, reports Winter. The expedition received coverage in various media and has stimulated wide interest.

There is plenty of talk about repeating this exercise, and perhaps even making this an annual event. Perhaps even a race in which many more paddlers can join in. "The intention is to start a process that might bring regular attention to the state of Cape Town's waterways."