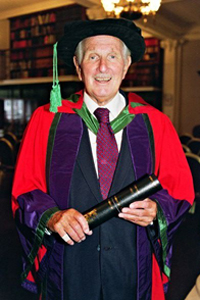 Lord Wolfson, founder-trustee of UCT benefactor the Wolfson Foundation, died on 20 May, aged 82.

Born on November 11, 1927, Leonard Gordon Wolfson was a British businessman, the former chairman of the family business, Great Universal Stores Limited (GUS), and son of GUS magnate Sir Isaac Wolfson, First Baronet. He was raised to the peerage as Baron Wolfson of Marylebone in the City of Westminster in 1985, and was a member of the Conservative Party.

On his father's death in 1991, Lord Wolfson succeeded as Second Baronet of St Marylebone in the County of London. He was granted a leave of absence from the House of Lords from 2008.

The Wolfson Foundation, a charity that awards grants to support excellence in the fields of science and medicine, health, education and the arts and humanities, has awarded over Â£600 million in grants, funding over 8 000 projects around the globe. The foundation's recent donations to UCT funded the scanning electron microscope for the Electron Microscope Unit; the refurbishment of the chemistry laboratories and the Wolfson Pavilion.

"Lord Wolfson's philanthropy was an inspiration to us all, and we always appreciated the foundation's major donations to UCT's strategic initiatives," said vice-chancellor, Dr Max Price.

In May 2008 UCT conferred an honorary doctorate on Lord Wolfson. "The opportunity for us to add Lord Wolfson to the long list of distinguished UCT degree holders was one that we cherished, and one that added great lustre to the reputation and standing of this university," added Price.