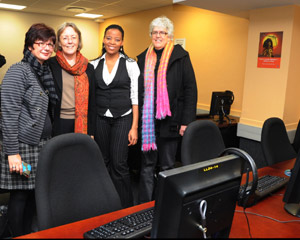 Speaking at the official opening on 27 May, deputy dean of humanities, Associate Professor Sally Swartz, said that the language labs had been in the planning for a long time, and marked a turning point in how languages would be taught at UCT.

"Initially there was a reluctance to make the jump into the technological age - but things have certainly changed."

Swartz noted that engagement with technology is a new trend - not only in humanities but in education as a whole.

"UCT is now aware how central technology is to higher education," she said. "Technology opens spaces for new development, and has changed the pace of both teaching and research."

Swartz thanked the Humanities Central Technology Unit for building the new facilities under budget, and the School of Languages and Literatures staff, who, she says, were "on our case" for the new equipment.