Humans so much alike, yet so different 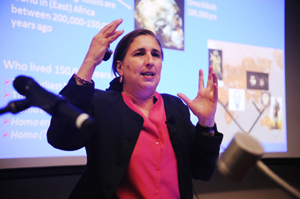 Out of Africa: Dr Marta Lahr explained humankind's African origins and the triggers for our diversity.

In delivering the latest in the year's series of UCT Vice-Chancellor's Open Lectures on 25 May, Dr Marta Lahr (reader in human evolutionary biology and director of the Duckworth Collection at the University of Cambridge) had set herself the ambitious task of explaining the African origins of modern humans - Homo sapiens - and the evolutionary processes that drove human diversity from there onwards.

Pooling genetic, archaeological and fossil evidence, Lahr began her lecture - suitably titled African Origins and the Evolution of Diversity- with the fossils of two of the earliest members of the species, both found in Ethiopia. These are the Homo sapiens idaltu fossil, which dates back to around 160 000 years ago, and a second fossil found in Omo Kibish that is said to be around 195 000 years old. They both boasted anatomical features - a vertical forehead, a prominent chin - that are unique to modern humans.

These fossils - not conclusive on their own, but taken together with genetic and other evidence - clearly indicate that humans originated somewhere in Africa, said Lahr. "They're the closest things in the fossil records to modern humans."

Africa is also the cradle for human diversity, explained Lahr. While there is very little diversity among humans as a species - when compared to apes, for example - it makes sense that, if humans originated and then split up here, most human diversity would be found on this continent; and this is what genetic testing has shown.

But why so little diversity for the species overall? The only explanation is that there must have been a moment of near extinction - what is called a population or genetic bottleneck - when most humans died out. (It's calculated that humans would have numbered around 10 000 in total at such a point, reported Lahr.)

Yet, for all that there is a relatively small amount of diversity, humans are remarkably different. These differences, explained Lahr, are driven by a jumble of four processes - geographical dispersal, Darwinian adaptation, cultural adaptation and extinction.

"We have reshuffled the little diversity that we have on a scale that few other species have," she said.

Listen to the full lecture.