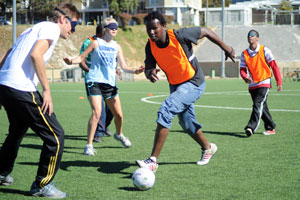 Blind side: Maximilian Huber of the SHAWCO team tries to stop Jongikhaya Guzana of the LoFoB team, while blindfolded Lisa Wallace (SHAWCO) and Stanley Rhodes (at back) try to keep track of the game.

With a morning of blind soccer, aka futsal, on Saturday, 1 May, UCT Disabilities Service again bid to champion disability sport, and highlight the role that it plays in the lives of people with disabilities at UCT.

For this occasion, Disability Services teamed up with Sport & Recreation, the Students' Representative Council and the League of Friends of the Blind (LoFoB), a Cape Town-based community organisation. In addition, the likes of the Students' Health and Welfare Centres Organisation (SHAWCO) and Graça Machel Hall fielded teams on the day.

The event also allowed a few UCT students to get a sense of what it means to be blind, donning sleeping masks to level the playing field, as it were. The game, normally played indoors, was even trickier as players struggled to hear the ball - fitted with a bell - on the soft Kopano turf. 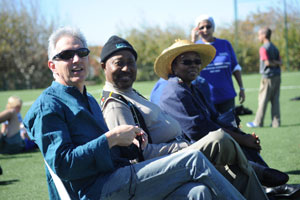 "It was a strange experience, and I was quite lost at times," said SHAWCO player Maximilian Huber.

For the likes of Jongikhaya Guzana and Sirjel January of the LoFoB team - both competitive soccer players until they lost their sight - it was fun to be back on a pitch.

"I used to think how was I going to play football again, and this has given me the chance to do so," said Guzana.

"It's more fun to play now, because it's not so competitive," added January.