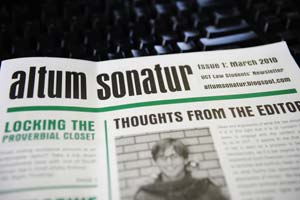 Final-year UCT law student Tim Hodgson is the brains behind the new student quarterly, Altum Sonatur, a publication aimed at bringing together the four law student societies at UCT.

"There's very little of interest to law students in Varsity," explains Hodgson. "I wanted to publish something aimed at law students, but is also accessible to everyone else. There's no reason why non-law students couldn't read it."

Hodgson's plan is to unify the law societies on campus by representing them in a single publication and promoting their activities to other students. A wide range of subjects are tackled in the first edition, including homophobia, polygamy, an analysis of punishment in a crime-ridden South Africa, and corporate law.

A regular feature is the Societies page, which lists announcements, news and activities of the four law societies at UCT, namely LAWCO (a branch of SHAWCO); the Students for Law and Social Justice Society, the Law Student's Council, and the Black Law Students Forum.

Another regular is In Class, a page for opinions from contributing law students.

Hodgson plans to release the second issue in May, which will be loosely based around the theme of diversity. Issue two will have features about affirmative action at UCT and in public services, and articles about African customary law, and Islamic law.