Status of outsourced services will not change 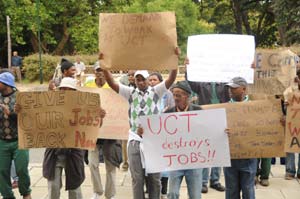 Access to benefits at UCT: An earlier photograph of a protest by members of an outsourced gardening and grounds maintenance services company.

In a communiqué to the UCT community vice-chancellor Dr Max Price has announced that all seven currently outsourced services should remain outsourced.

Last year the UCT Council appointed a task team to review UCT's position on the outsourced service providers that operate on campus. At the last meeting of Council, held on 27 March 2010, it considered a report from independent consultants appointed by the task team as well as a response from management.

After much debate, the Council voted to maintain the outsourcing arrangement. There are three main reasons for this decision. Firstly, UCT's experience of more than a decade of the outsourcing model indicates that it is working for the university in terms of efficiency, quality of service, flexibility, value for money and in minimising risk.

Secondly, it allows the university leadership to focus on academic leadership issues, reducing the amount of human resource management and management of non-core services in which UCT has limited expertise. Thirdly, the consultants confirmed that the circumstances of 10 to 15 years ago that led UCT to the decision to outsource the services have not changed significantly over that period - thus there is no reason to change its policy if the systems are working.

The independent consultants advised that the security services, catering services, grounds services and campus cleaning services should all remain outsourced. Management agreed with this proposal.

The consultants further proposed that the residence cleaning, the shuttle service and a particular section of the garden services be insourced. Management did not agree that there was a convincing case for insourcing these three services, and recommended to Council that these services remain outsourced.

Management's main arguments against the insourcing included the following. In the case of residence cleaning, insourcing will lead to inefficiencies, particularly because of the need for different types and intensities of cleaning, which vary between term and vacation times. An outsourced company can redeploy employees as needed, bringing in specialist cleaning staff and equipment during vacation periods, and utilising equipment and staff elsewhere when not needed at UCT. This cannot be done as an insourced service. Moreover, the residence cleaning service has operated well and there is no strong case, based on quality, risk or management capacity, to change the current status.

The argument that cleaners in the residences form close relationships with students was recognised, but there was no evidence to show that such relationships do not form equally well when cleaners are outsourced, provided there is stability in the workforce, which there is, even when UCT changes outsourced companies.

In the case of the shuttle service, UCT believes that most examples of best practice indicate it would be going against national and international best practice trends to insource the Jammie Shuttle service. An additional factor is the uncertainty about the rapid transport system and its impact on the city and our transport system. The risk to UCT of having to sell the buses and retrench workers if the city transport system were to result in scaling back of the Jammie Shuttle is eliminated by outsourcing.

Finally, the shuttle service has highly varied intensity during term and vacation times, requiring different numbers of drivers, which are more efficiently managed by an outsourced company. Management therefore indicated to Council that its view is to retain the service as an outsourced entity.

In the case of the garden maintenance service (which is very small) UCT believes it should remain outsourced for the same reasons that the rest of the gardening and grounds services are outsourced.

The key arguments for insourcing related to the conditions of service of the employees, their job security and the quality of the relationship between outsourced workers and other members of the UCT community. Management is not convinced that these three matters constitute a solid case for insourcing. In terms of the conditions of service UCT has done much. The university has developed a code of conduct for all outsourced companies. It has identified some shortcomings in the way it manages the code of conduct. A task team is being assembled to look at the experiences over the past two years in this regard and to develop clearer guidelines. UCT will invite all interested stakeholders to participate in these discussions.

The university also introduced the Supplemented Living Level (SLL), which sets minimum wages to be paid to the workers. UCT believes that the pay packages are fair. In terms of job security, it recognises that the outsourced model presents insecurity for workers, but believes its existing policy mitigates against this risk.

"Our policy determines that when we change outsource companies, the new company must take on the workers of the old company," said Price. "The quality of the relationships between workers and others at UCT is important, and we were pleased to note in the worker surveys that the majority of outsourced workers considered themselves members of the UCT community. It is our intention to discuss ways we can involve the outsourced workers even more deeply in UCT life, by including them in certain events and campus communications, as an example."

Following the Council meeting, UCT has agreed to investigate the possibility of extending staff tuition rates and career counselling services to outsourced workers and their dependants. Workers indicated that access to these benefits was the key reason for wanting to be employed by UCT. They also raised the issue of medical aid and retirement funds, which are variable across the different employers. UCT has committed to raise these issues with the unions and the various employers.