Van der Schijff off to China 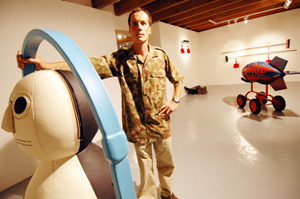 Michaelis lecturer Johann van der Schijff won an Artist-in-Residency award at the Spier Contemporary 2010. Monday Paper spoke to him about his award and his plans for the future.

What is the nature of this artist in residency award?

Although the prize I won was awarded by the Thamdigi Foundation based in Arnhem, The Netherlands, I will actually go to the Beijing Studio Centre in China, with whom they have an exchange programme.

Residency is a time-out period for artists to reflect and focus on their creative process. I am due for a year's sabbatical in 2011, and plan to do the residency in China during the beginning of that period in order to kick-start my creative output.

How did you come to win the award?

All artists selected for the Spier Contemporary 2010 Exhibition were invited to put forward a proposal for an artist-in-residency award. Out of the 14 prizewinners, seven were Michaelis graduates. Christopher Swift, Zen Marie and Hasan and Husain Essop received cash prizes, and Jacki McInnes, Mohau Modisakeng and I received residency awards.

What is the nature of your work?

Growing up in South Africa and living in a society notorious for conflicting ideologies and cultures, questions of power relations in society underlie much of my work, forcing the viewer into a position of choice in their engagement with my artworks.

Heartbreaker is my installation at the Spier exhibition. A shiny demolition hammer elevated on a flashy black trolley, complete with white pin-stripes and chrome wheel caps, lures the viewer into engaging with it. When the viewer moves towards the sculpture for closer inspection, a motion sensor, used in domestic alarm systems, triggers Heartbreaker into action. The noise (reminiscent of machine gun fire) of the chisel blade beating away into thin air, as the trembling demolition hammer lies strapped down onto red leather cushions, is a sight of the absurd; repulsive, yet exhilarating.

How do you feel about being away from home for so long?

I love traveling and am an adventurer at heart. I think it will be a much bigger challenge for my wife, Nicky, who has a full-time job and also has to look after our two young children while I'm away.

What do you hope to achieve while you're away?

I would like to engage with the local community to spar with their own cultural stereotyping, fears, hopes and concerns. Through arts and craft sessions, I would like to develop drawings and paper cut-outs in order to come up with eight punch bag designs representative of their community.

I look forward to the opportunity of focusing on my own art production in a completely new and stimulating environment where I can be the student for a change.

A new solo exhibition. I hope that the work produced in China will form part of that exhibition. If it can also travel to China it would be a very big bonus.