New dean will ramp up research 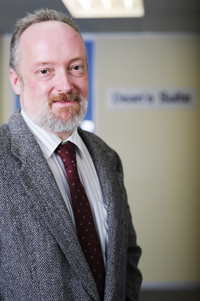 New boss: "The frontier for South African business should be Africa." - Prof Don Ross, new dean of the Faculty of Commerce.

Professor Don Ross, newly-appointed dean of the Faculty of Commerce, has been with the faculty for over 12 years. It's no surprise, then, that he plans to hit the ground running when he takes office on 1 June.

And he has plans. Like "retiring" from drawing up the faculty's time-table, a responsibility he's managed for much of his 12 years at UCT, and with such "masochism" that, until 2003, he did it for the Faculties of both Commerce and Humanities.

Then, on a more serious note, he's going to set about having the faculty's course registration automated. This is not merely an attempt to drag Commerce kicking and screaming into the 21st century, but is also a critical cog in Ross' vision for the faculty.

Registration is a "marvellous circus to behold", he says, but demands a platoon of staff to deal with a small mountain of paperwork. Having the system fully automated by no later than 2012 will mean staff can spend their valuable time on other tasks.

"If you're going to have ambitious goals for an under-staffed place, you'd better have freed up some time for them," says Ross, who, as he has been splitting his year between UCT and the University of Alabama at Birmingham in the US since 2004, knows a thing or two about demands on time. "It's also a signal to staff that you take their time seriously."

One of the things he wants them to do with their time is dedicate more to research. And to sourcing more money for research.

The latter is getting harder, Ross admits. Paradoxically, as the burden of teaching grows with an increasing number of students, the academic faculty is getting younger and more junior. (That's a national phenomenon, he points out.)

That impacts on funding, as junior faculty can expect a hit rate of around one successful grant application out of 10, while senior faculty work on a rate of one hit for every five applications.

Even under such trying conditions the Faculty of Commerce has done well, Ross argues. But it can do better.

"Research output has only increased in the direction of the strategic target necessary for compatibility with UCT's self-identification as a research-led institute. But we need to do more than that, because research revenue is the only secure revenue stream that is under our control."

A model he'll be touting is one he's been following in his own consulting work for many years: taking on consulting jobs that also offer opportunities for research on which master's and PhD students can cut their teeth. He's funded a number of graduate students through this kind of 'research-relevant consulting'.

Ross' five-year plan for the faculty - which has a strong African flavour to it - builds on this premise. So, for example, he hopes to build international partnerships in Africa, to seek corporate sponsorship for prizes for leading Africa-focused research, and to tap into informal ties with corporate Africa.

"The frontier for South African business should be Africa," he says. "It's the one place where we have an edge."

Transformation's also high on his agenda, but that ties in with his Africa-focused research objectives. And with the support of its academic development unit - he was deputy dean when it was first set up - the faculty's also changing its student body profile.

In fact, that initiative has been one of the faculty's success stories, he points out. In 2009, pass rates for students on these academic development programmes came close to matching that of students on standard programmes.

"Compared to where we were, when 65% of students on academic development were dropping out before the end of their second year, that's remarkable."

It's an achievement that demanded an investment of time and money, though. Which may be another useful lesson for many while he is in charge.