UCT and Penn State want to get serious 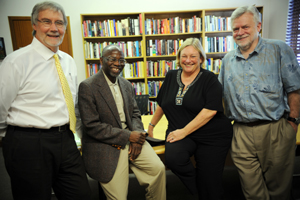 Deputy vice-chancellors Professor Jo Beall and Professor Danie Visser hosted a visit by delegates from the US's Penn State University to talk about future - and deeper - relationships between the two institutions.

Professor Michael Adewumi, vice-provost for global programmes, explained that Penn State is identifying key institutions across the globe with which it hopes to "deepen engagements" in teaching, research and outreach.

"The whole goal is trying to tackle some of the global challenges of our time, which is something no institution can manage on its own," said Adewumi.

One of these challenges is climate change, an area in which Penn State and UCT have been collaborating for some time. So Penn State's Professor Robert Crane, director of Penn State's Alliance for Education, Science, Engineering and Development in Africa, explained some elements of the Parks and People project he has been running with UCT's Professor Bruce Hewitson, allowing both UCT and Penn State students to spend valuable research time in the Dwesa-Cweba Nature Reserves in the Eastern Cape.