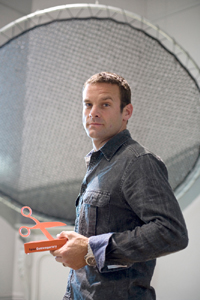 Paradigm-pushing artist and UCT alum Chris Swift was announced the mixed media winner at the launch of the Spier Contemporary 2010 Competition on 13 March.

Swift, who graduated with a Bachelor of Fine Art in 2009, exhibited works at the Cape Town City Hall venue such as Nelson's Column, for which he used four tonnes of metal material from Robben Island to construct a six foot tower.

Another was Condom Piece, a large condom 'blanket', which was installed at the exhibition so that it was illuminated by the daylight - and the street light at night - shining through the stained glass VOC-marked City Hall windowpanes.

"Art has links and threads into different lives and stories," says Swift. "The Nelson's Column piece reflects back on the Olympic Games of the Ancient Greeks, and the idealism that still surrounds any competitive arena today."

Swift's works are part of the Spier Contemporary 2010 exhibition, which is aimed at reflecting South African life in all its forms. Themes include a search for identity, an examination of the state, the lack of faith in leadership, the FIFA World Cup and interpretations of the urban landscape.

Swift comments: "Our art reflects a constantly changing society and in that light, it is so often much fresher and more dynamic than what is produced overseas. Art needs to reach out to its consumers, to preserve life experiences and to be a visual 'voice'."

The exhibition, in the Africa Centre in the Cape Town City Hall, continues until 14 May. Entrance is free.