Passing of an era - tribute to Cas Troskie 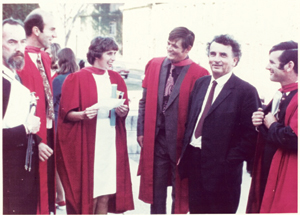 The passing of Cas Troskie is also the passing of an era of almost 50 years of association with and service to the University of Cape Town. He was a kindly witness to and enthusiastic participant at the enormous changes in the institution he deeply loved.

At UP he met Irene Dracht, whom he married in 1960. During 1962, using special leave from the CSIR, the couple stayed at Columbia University, New York. It was there that he began to build up a substantial set of international contacts. Some led to visits by high-profile statisticians to the South African universities in later years.

Cas was appointed as UCT's first full-time lecturer in statistics in 1964, in the Department of Mathematics, to the consternation of his father, fearful of so dissolute and implacable an environment.

He became professor and founding head of the Department of Mathematical Statistics in 1966. In the early years as HoD, Cas pioneered the use of an IBM electric typewriter with a special golf-ball attachment for mathematical notation in multivariate analysis. Thereafter he mastered each new computer resource or facility that a wider set of innovators was bringing to UCT.

At some point Cas was commissioned by UCT to research and advise on the choice of the first UCT computer, the UNIVAC. This shared facility was controlled and fed by punch cards, each carrying a single line of instruction code, or a string of data.

It greatly amused Cas that nowadays he would be able to perform the major elements of many months of data analysis work from his PhD in the twinkling of an eye, with so commonplace a tool as Excel.

He chose to direct his PhD's theory of multivariate analysis and associated work on outliers and anomalous observations into applications on the Johannesburg Stock Exchange. This orientation led him into the theory of time series and econometrics, but also to special expertise regarding the stock exchange. He supervised 24 MSc and 14 PhD students, mainly in these domains, and furthered his expertise during sabbaticals at the University of Gottingen (1980) and Stanford University (1986).

He built a strong department, bringing in, as staff or students, many who would make their mark in the statistical and academic world of South Africa and internationally, including June Juritz, Arthur Money, Michael Greenacre, Les Underhill, John Affleck-Graves, Trevor Hastie, Walter Zucchini and Theo Stewart.

Before retirement he was the senior professor at UCT, the longest-serving current member of the professoriate. He warned of the calamity that might befall UCT if he were ever called upon to exercise that status under the terms of the University Act.

He was a proud father of four sons (Casparus, Roelof, Johan and Andre), and a delighted grandfather of three boys and four girls. To Irene and all his family, the UCT community extends its condolences.

(Edited from the tribute delivered by Prof Tim Dunne at the UCT memorial on 24 March.)