Honouring those who suffered 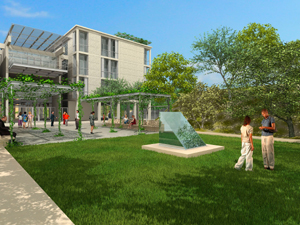 A visual of what the memorial to the Rustenburg Graveyard could look like.

UCT has a strong appreciation for the cultural heritage of the local community and the history that has taken place on the lands where the university campuses have been built.

For this reason, the new complex of buildings on middle campus will include not only the School of Economics and student administration offices, but also a memorial space to commemorate the histories of dispossession that took place on the site: from the indigenous peoples, to the slaves who were brought to the Cape by the Dutch East India Company in the 17th and 18th centuries, to the successive dispossession experienced by descendant communities later in Cape Town's history.

The slaves and their descendants worked the farms along the Liesbeeck River and number in the hundreds. Some were buried in a cemetery that extended into parts of what is now Middle Campus.

Part of the land UCT now occupies was once the Rustenburg farm, which stretched from the present Main Road to the Summer House beneath the M3 freeway. Today the site of the old Rustenburg burial ground lies immediately next to and partially underneath All Africa House, built in 1996, before the burial ground was identified as such.

Archival research has revealed that the human remains were removed in the 1930s when UCT built terraces for the tennis courts, but there are no records available to indicate where they are now.

As required by the National Heritage Resources Act of 1999, UCT initiated a public participation process in 2007 in terms of the South African Heritage Resources Agency's requirements. Professor Martin Hall, who was a deputy vice-chancellor of UCT at the time, noted that this process offered an opportunity for UCT to strengthen ties with the Cape Town community.

He wrote: "The Rustenburg Graveyard is an opportunity to frame the development of the Middle Campus around the themes of memory and reconciliation. Rather than seeking to build over the Rustenburg Graveyard site (with appropriate mitigation measures, as required in the heritage legislation), we could initiate an open campus dialogue about our deeper connections in history, reaching back into the 'forgotten' 17th Century, and the most appropriate way of marking this history on the site – 'Breaking the Ground' is, then, an open dialogue about a hitherto 'buried' aspect of our deeper heritage ..."

UCT adopted a set of principles to follow in its development of the affected area:

Interested individuals and groups, both within UCT and from neighbouring communities, formed the UCT Burial Ground Stakeholders Forum to develop and discuss different options for honouring the memories of those who had been displaced.

This is an active group which is diverse in its representation, including individuals, neighbours, descendants of landowners and slaves alike, and community organisations such as the local ratepayers association.

This group has met regularly over the last two years. Its meetings have been facilitated by Doreen Februarie of Nosipho Consultancy, and architect Noeleen Murray, who is a consultant to UCT. The group has contributed important suggestions about how the development of a site of memory can help tell the story of Rustenburg in a way that recognises the histories of all the inhabitants of the area, including the slaves who lived and worked here.

It is also helping UCT to build significant ongoing relationships with its immediate neighbours as well as the wider community of Cape Town.