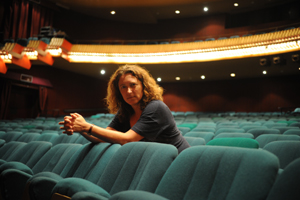 Multi-award-winning writer, director, and producer Lara Foot became the first female artistic director of the Baxter Theatre when she succeeded Mannie Manim in 2010.

In 2005 Foot relocated to Cape Town from Johannesburg, with her family, to take up the position of resident director and dramaturge at the Baxter Theatre, a post she held until 2007, the year she finished her master's degree at UCT.

During her career, Foot has directed over 40 productions, 29 of which have been new South African plays. The founder of the Barney Simon Young Directors and Writers Festivals, Foot has played a role in the development of more than 35 new plays.

"I am delighted and honoured to be appointed to this position," says Foot. "I look forward to fostering creative relationships with the artists of Cape Town, the university and adjacent districts.

"Following in the footsteps of Mannie Manim is a great challenge. I hope to build on what he has achieved and strengthen the success of the Baxter in the years to come."