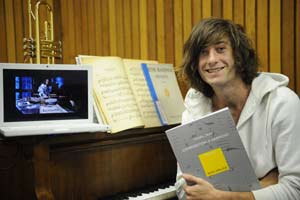 Making movies: Jonathan Hunter scored the music for the award-winning short film A Flight that Lost its Feathers.

Fourth-year student at UCT's South African College of Music Jonathan Hunter has already made his mark in film score composition. He wrote the music for the award-winning short film A Flight that Lost its Feathers.

The 15-minute film, directed by Jonas Staerk and written by Max Nadolny, picked up the Jury award for best student film from The South African School of Film, Television and Dramatic Art (AFDA). It has since been sent for selection for the Cannes film festival.

Shot locally, but inspired by the images of Salvador Dali and the renowned comic book writer Will Eisner, the film tells the story of a young girl who dreams of becoming a singer and moves to the city after a personal tragedy. Here she meets a dying pianist, who needs help to finish his composition.

Hunter wrote about 20 minutes of music for the film, which he describes as leaning towards avant-garde jazz of the 20th century. "My work is influenced by electronica, glitch and dubstep, as well as cinematic musical styles," he says. "I'd like to get away from the fact that an orchestra has to be standardised. I'd like to add groove to that, like a drummer and a bassist."

Originally from Port Elizabeth, Hunter moved to Cape Town to study music at UCT. In 2011, he plans to move back to the Eastern Cape to take on his postgraduate studies at Rhodes University.