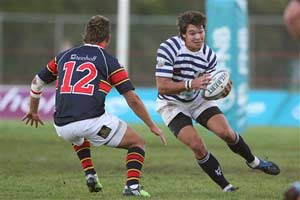 The Ikey Tigers' convincing 38-24 win over the University of Pretoria's Tukkies in their FNB Varsity Cup clash at UCT on 15 March- earning the Tigers their third successive semi-final berth - was palled only by the frightening-looking head injury to substitute scrumhalf Jean-Paul Robert, who had to be stretchered off midway into the second half. (Good news is that Robert's fully recovered, but will be sidelined for a few weeks.)

Robert's injury, however, followed a decent recovery for the Tigers, who had failed to take advantage of a strong wind at their backs in the first half, managing only a slender 20-12 lead going into the break. (Blame that on a misery of wayward passes and dodgy tackling.) That eight-point advantage was well below the 20-point margin that coach, John Dobson, had set his gameplan on.

Only a Fergusonesque tongue-lashing from the coach during the break set his young wards straight again.

"I'd never spoken to them like that before," admitted a sheepish Dobson after the match. "I told them they were embarrassing themselves and the university."

But two quick tries in the opening 10 minutes of the second half saw UCT stretch their lead to a more comfortable 35-12.

Tukkies hit back with two late tries - the UCT players looked shell-shocked after Robert's injury - but never looked like they were going to overtake the Tigers.

The win earned UCT more than the one point they needed to secure a home semi-final. They now play the University of Free State's Shimlas on Monday, 22 March, in a televised game at 16h30.