Ikeys give Maties pause for thought 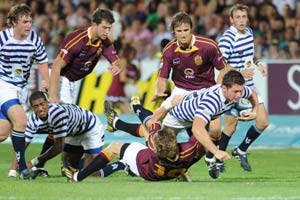 On the fly: Ikey fullback Therlow Pietersen capped a sterling performance against Maties with this try, just evading the attentions of Maties' Charl Weideman.

Here's the nub of last night's FNB Varsity Cup encounter in Stellenbosch - for much of the game, UCT's Ikey Tigers made a very, very good Maties side look very, very ordinary.

And but for a few stray kicks, fumbles and errant passes, that final scoreline of 17-23 in Stellenbosch University's favour could have looked very different. As has become custom after their clashes against their archrivals, UCT will rue what should have been.

That said, however, the home side showed just why they've won the trophy two years in a row, and why they've scored 291 points and conceded only 79 this campaign. (Their point difference of 212 dwarfs all others, with UCT coming in a distant second best with a margin of 70 points.) Lethal on the counterattack and always able to create an overlap on the wings, their two tries came from UCT mistakes well in the Maties half.

Although, for much of the second half, you wouldn't have thought that it's Maties sitting pretty on the top of the Varsity Cup log. Trailing 0-13 at one stage and 5-23 by early in the second half, the Tigers' running game - which seemed to backfire in the first half - came into its own, and with tries from Mark Esterhuizen and Therlow Pietersen and more than 20 minutes left on the clock, UCT looked the team most likely to win. 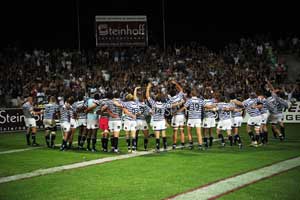 But handling errors from the Tigers and tenacious tackling from Maties kept the scoreline and Maties' undefeated run intact.

"We showed for the first time in this tournament our real pattern of play," said coach, John Dobson, after the match. "We opened them up at will."

A pity, then, that UCT couldn't convert their possession into points. But, noted Dobson, he'd rather lose now than in the final his side must be confident they'll reach. (And probably play Stellenbosch again.)

There are a few areas his side will have to do some homework on before then, however, notably around their set pieces, admitted Dobson. The Tigers' lineout work and restart kicking let them down and cost them valuable territory against Maties.

"We need to be more clinical around those set pieces."

But before that potential rematch, UCT will focus on their last stage game, against University of Pretoria's Tukkies at UCT on 15 March. The Tigers will have to win the game to secure a precious home semi-final.