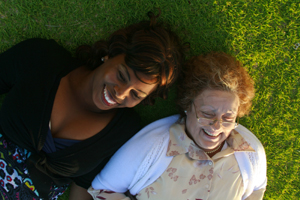 UCT alumnae Ntombi Makhutshi and Robyn Scott are starring in the award-winning two-hander, London Road, which premieres at the Kalk Bay Theatre on 11 March.

The up-and-coming Makhutshi stars as Stella, a young Nigerian woman, opposite the award-winning Scott as Rosa, an elderly Jewish woman.

Winner of the 2007 Audience Choice award at the Performing Arts Network of South Africa's new South African playwriting competition, London Road tells the story of an odd couple pulled together by a single act of violence.

Stella lives in a damp, converted storage room. Her distant family, gangsters and her instinct for survival make her mistrust strangers. Rosa lives in a fifth floor flat. Her children and grandchildren live overseas, so she occupies herself with the business of her neighbourhood.

But despite their differences, the women are united by common themes: absent men, scattered families, broken relationships, and a dark sense of humour and survival.

"The play is a simple and intimate reflection on growing old, loneliness, fragmented families and the healing power of a friendship," says director Lara Bye. "It is a glimpse into the private lives of two very different women living in a block of flats in London Road in Sea Point."

London Road is written by rising Cape Town writer Nicholas Spagnoletti, in collaboration with the director and cast.

"Sea Point has long been a new home for many immigrants, minority groups and marginalised people," says Spagnoletti. "The play echoes the realities of those Sea Point families in a state of migration and emigration against the backdrop of urban decay and rejuvenation that is contemporary Sea Point."

Ntombi graduated in 2006 and was nominated for a Fleur du Cap award that year. She has worked in television, theatre and film.

Scott, a 1995 graduate, is the winner of two FNB Vita Awards, and earned a Fleur du Cap nomination in 2009. She has worked extensively, and is well-known for her role as Jacomina in the M-Net comedy series Van der Walt's Fault.