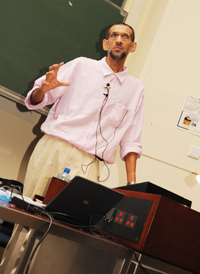 Preserving history: Assoc Prof Goolam Vahed was the first speaker in a series of events commemorating the 150th anniversary of Indian history in South Africa.

The history of Indians who came to what was then Natal in the late 19th century was explored in a lecture by Associate Professor Goolam Vahed of the University of KwaZulu-Natal's Department of Historical Studies, on 3 February.

The lecture, titled Indentured Indian Workers on the Plantations of Natal and Beyond: 1860-1911, was the first in a series of events commemorating the 150th anniversary of Indian history in South Africa, presented by UCT in conjunction with the 1860 Legacy Foundation.

The foundation was set up to acknowledge the Indian community's contribution to South Africa, while enhancing the building of a non-racial society.

Using surviving letters, photographs and official documents from the era, Vahed reconstructed the personal history - including marriages, separations and traumas - of several indentured Indians who came to South Africa seeking work. With their various experiences, Vahed has painted a broader picture of the life and times of Indian workers during that period.

Vahed is the co-author of Inside Indenture: A South African Story, 1860-1914 with Dr Ashwin Desai of the Centre for Civil Society at the University of KwaZulu-Natal. He has also contributed to a number of other books, including Blacks in Whites: A century of cricket struggles in KwaZulu-Natal and The Making of a Political Reformer: Ghandi in South Africa.

A podcast of Vahed's lecture is available on the Monday Paper website at here.