UCT gears up for 'koshuis' rugby 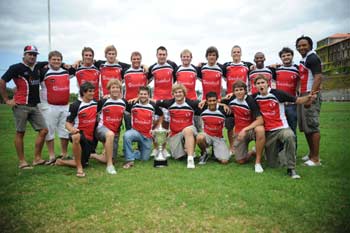 No kitting around: UCT's Tornadoes, donning their new tops, are geared up for their opening Steinhoff Koshuisrugby Championships game on 22 February.

The FNB Varsity Cup appears to live by the maxim that bigger is better.

Alongside the main competition, sponsor Steinhoff International is running the Steinhoff Koshuisrugby Championships.

Steinhoff has been doing its bit to raise the profile of this spinoff event, in which the Steinhoff Tornadoes - winners of the UCT internal league last year - make their debut on Monday, 22 February.

To mark the Koshuis kick-off, Steinhoff representatives have been travelling around the country to meet with the teams and present them with new kit, as they did at UCT this week. Much like its bigger brother, the Koshuis championship pits eight universities against each other, although, in this case, these are internal-league or residence teams.

The format's also different, with the teams broken up into two groups, each side playing only the three other teams in their group (just once) before the competition heads into the semi-finals.

The prize money may not be as lucrative as that of the Varsity Cup, but it's enough to make universities sit up and take notice. Steinhoff will award R15 000 plus a sizeable trophy to the winning team, as well as a Hertz-sponsored Chauffeur Drive to a South African destination of his choice to the Man of the Match in the final.

In addition, that final - a curtain-raiser to the Varsity Cup Final - will also be televised live. No wonder then that rumours are flying around that teams are taking the competition a little more seriously than they do their traditionally laidback internal league games.

Tornadoes, winners of seven of the past 10 UCT internal leagues, are still sticking to their twice-a-week-practice regimen, but captain, Brad van der Westhuizen, admits that practice is no longer just an extended game of touch rugby. And while the side will stick to its trademark running rugby, you're also likely to see a few more tactical kicks than is custom.

The Tornadoes will play Madibaz, of the Nelson Mandela Metropolitan University, in the curtain raiser to the Ikey Tigers' Varsity Cup game against Tshwane University of Technology at UCT on 22 February.