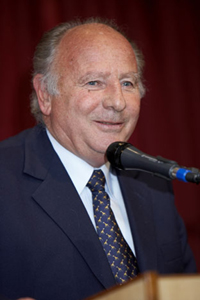 Mendel Kaplan once told me that the key to success was focus. I witnessed it in all his efforts. Details concerned him greatly, but he never lost sight of the big picture. Indeed, he created the big picture.

Mendel, who recently passed away, initiated, led and funded numerous Jewish, Zionist and other projects in South Africa and throughout the Jewish world.

There is much to celebrate in his 73 years: Cape Gate has been transformed from a modest business selling products like wrought iron and garden benches into a vast conglomerate producing its own steel; it became one of the largest privately-owned companies in South Africa. The expansion was largely orchestrated by Mendel and his brother Robert.

Cape Gate is a family concern. Family was Mendel's passion. Contact was maintained across continents. Newsletters found their way to every relative. Mendel and his loving wife Jill loved reunions. Everyone's progress was followed and appreciated. Mendel encouraged their efforts.

Board meetings at the Isaac and Jessie Kaplan Centre for Jewish Studies and Research at the University of Cape Town, founded in honour of Mendel's parents, were always exciting. Mendel knew balance sheets were not my strongest suit. But he would leave that alone.

Projects, conferences and research interested him. There were no formalities. It was always down to business..

No doubt Mendel's law degree from the University of Cape Town and his master's in business administration from Columbia University in New York stood him in great stead. But it was his creativity, vision and focus that set him apart.

Mendel was always three steps ahead. He provided direction and ideas. But he also appreciated contestation. Exchanges were often tense but always underpinned by loyalty.

When Mendel set his mind to something, he was unstoppable. He had a passion for matters Jewish. A deeply spiritual man, he was always reading, learning and writing. His most recent book recorded his travels as a young man in East Africa. It was written for his grandchildren.

Mendel was immersed in South African and international Jewish affairs. His was a household name in the Jewish world. Although he moved in hallowed circles, Mendel always had time for lesser mortals. More than that, he cared for them.

The Kaplan Centre, too, has appreciated his generosity. I know the Centre meant much to him, although it was only one of many flourishing ventures he created in a life dedicated to the Jewish people, to Israel, to family and to the less fortunate, Jewish and non-Jewish.

Prof Paul Ensor, Dean of the Faculty of Humanities, has added: "Over the years I interacted with Mendel Kaplan often, and greatly enjoyed his forthrightness, his generosity, his curiosity, and his truly wonderful sense of humour. UCT, and the Faculty of Humanities in particular, have benefited materially and intellectually from his tremendous generosity over many years. and we will miss him greatly. He will be remembered through the Kaplan Centre and its ongoing work, and we will find a fitting way of paying tribute to his legacy. It was a great privilege to have known and worked with him."