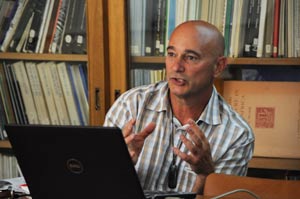 Professor Jon Altman, director of the Centre for Aboriginal Economic Policy Research at the Australian National University presented a seminar on Commodification of Environmental Knowledge: An alternative development strategy for the Australian indigenous estate on 24 November.

There is a tension building up in Australia in Aboriginal affairs as mainstream employment and education departments and environmental agencies pursue different pathways for the development of the country's indigenous citizens living in remote areas.

The dominant state project of improvement seeks to integrate the Aboriginal population into the mainstream, while, at the same time, environmental agencies provide support for indigenous Australians to remain living on the massive indigenous estate that covers 1.5 million square kilometres, an area larger than South Africa, where only 100 000 Indigenous Australians reside.

So said Professor Jon Altman, director of the Centre for Aboriginal Economic Policy Research at the Australian National University in his seminar, Commodification of Environmental Knowledge: An alternative development strategy for the Australian indigenous estate.

The event on 24 November was presented by UCT's Environmental Evaluation Unit and the Department of Social Anthropology as part of the collaboration between UCT and the Australian National University.

In recent years, with the declaration of Indigenous Protected Areas, Aboriginal land owners have looked to environmentally manage their land, combining traditional and western scientist ways. But the welfare gap between them and the rest of the population remains substantial.

The Australian state has committed billions of dollars over the next decade to move indigenous people out of the remote areas into larger townships to train them for mainstream employment. Altman argues that that such a modernisation approach historically failed.

"This approach was integral to the colonial assimilation project in the past," Altman explained.

"Its revisiting in the 21st century is not only destined to fail but is counter to the aspirations of many Aboriginal people to live on their traditional lands. and is not in the national interest given the environmental services provided by Aboriginal people over 20 per cent of the Australian continent."