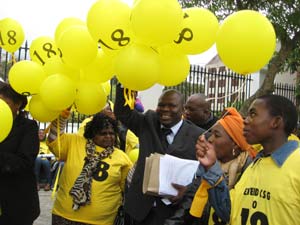 Up in the air: Community leader Mama Darlina, Vincent Magagula of the Portfolio Committee on Social Development, and mother and son Florence and Sibusiso Mahlangu celebrate Cabinet's decision to extend the Child Support Grant.

Just as they were gearing up for the latest offensive in their eight-year campaign to have the Child Support Grant (CSG) extended to include children aged 15 to 17, a civil-society alliance - which includes UCT's Children's Institute - heard the glad tidings that the State had, finally, heeded their call.

That's a further two million children, at some estimates, who would now receive a helping hand, in addition to the some nine million already eligible for the grant.

Not the kind to have the wind taken out of their sails, the lobbyists - made up of the Children's Institute, human-rights organisation Black Sash and the Alliance for Children's Entitlement to Social Security - turned the news into a celebration.