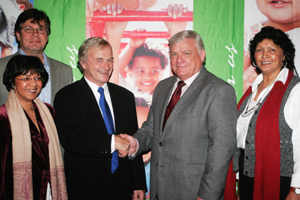 In April this year, the HCI Foundation, through subsidiary company Golden Arrow Bus Services, became the new Naming Rights sponsor of the Baxter's popular and intimate 172-seater venue on the upper level of the complex. The revamped theatre is now called the Baxter Golden Arrow Studio.

"Having the studio in the Baxter Theatre Centre named after Golden Arrow Bus Services is a further commitment to the existing close association we already have with the theatre," said Golden Arrow CEO Nick Cronje at the launch of the sponsorship.

Golden Arrow's association with the Baxter Theatre Centre stretches back two decades. Through the company's provision of free transport for the Baxter's audience development programme, over 5 000 teenagers and young kids from all over the Western Cape and the Cape Flats attend shows at the centre each year.

The BASA awards, regarded as the country's most prestigious arts, culture and business awards, honoured 14 business and arts partnerships.