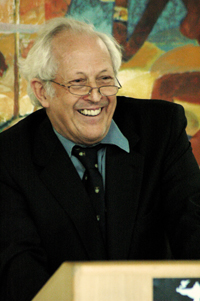 Re-rating: Emer Prof George Ellis of the Department of Mathematics and Applied Mathematics was first awarded an A-rating in 1984. He is one of 11 UCT researchers whose A-ratings were confirmed by the NRF on 1 September.

Eleven researchers from UCT had their A ratings confirmed by the National Research Foundation in September, an unprecedented number from a single South African university in one year and more than half of all the A ratings awarded.

Vice-chancellor Dr Max Price said: "I congratulate the individuals who have maintained or improved their international standing in the research community. It is also a remarkable achievement for the University to have recruited, facilitated and retained so many leading scientists.

"It positions the university as a leader in attracting post-graduate students and research projects and grants, and in enabling us to pursue our mission of producing the next generation of academics for South Africa and the continent.

"It is this commitment to quality that establishes UCT firmly among the community of world-class, research-led universities."