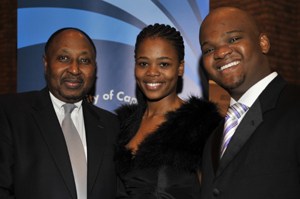 Deputy vice-chancellor Prof Thandabantu Nhlapo (left) with soprano rising star Pretty Yende - fresh from the Hans Gabor Belvedere International Singing Competition in Vienna where she won all the first prizes - and tenor and SACM student, Given Nkosi, with whom she performed at the concert.

The audience in the Baxter Theatre were in for a treat on August 13 as some of South Africa's most renowned musicians - and products of the South African College of Music (SACM) - lit up the stage at the annual UCT Alumni Concert. Now in its third year, the concert celebrates SACM graduates and, at the same time, aims to raise funds for music bursaries.

Award-winning soprano Pretty Yende gave a taste of her talent. UCT graduate, Nina Schumann, associate professor in piano at the University of Stellenbosch and her husband, Louis MagalhÃ£es, delivered a world-class performance.

Jimmy Dludlu, a regular on the South African music circuit, jazzed up the evening, as did popular singer Melanie Scholtz, who lectured in jazz vocal studies at UCT from 2004 to 2005.

Rounding off the evening was the ever-popular UCT Big Band, directed by Mike Campbell.

"And they all did this for free," said deputy vice-chancellor Professor Thandabantu Nhlapo. "We really appreciate the fact that our former students wish to keep up their relationship with UCT. They consider that the university was central in opening doors to their careers and this is their way of giving back."

Nhlapo said that the Department of Alumni and Development (DAD) was seriously considering the issue of sponsorship for future concerts. "This would then unlock the potential of the concert to generate funds to turn the bursaries idea into a reality."

He also expressed his deep satisfaction that the concert had returned to the Baxter (last year it took place on upper campus). "It's the four-cornered collaboration of the SACM, the Baxter, UCT's DAD and the performers that really does it for us."

Nhlapo gave special thanks to Associate Professor Mike Campbell, Professor Kamal Khan and Gillian Lindner, all of the SACM, as well as Dr Jim McNamara's team at DAD: Lungile Jacobs, Jasmine Erasmus, Monde Mjebeza, Alex Plaatjies, Anita Wildeman and Thulani Madinginye, for their energy in organising the concert and making it a success.