Hockey side folds against Maties 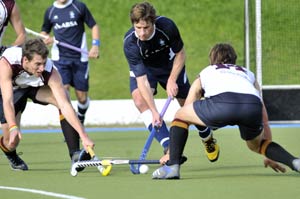 Coming through: UCT's Sean Fielding (in blue) attempts to negotiate his way past Maties' David Wilson and Matt Hampson (14).

With a 2-4 defeat on 15 August, the men's hockey first team wasted a golden opportunity to make inroads into the University of Stellenbosch's nine-point lead at the top of the Western Province Grand Challenge log.

The loss has probably also put paid to the UCT title chase.

UCT took a surprise 2-0 lead early in the first half, and were more than matching the league favourites. But a goal on half-time gave Maties just the foot in the door they needed. The momentum shifted after an early second-half equaliser, and Maties pressed home the advantage with two further quick strikes.

With the win and bonus point, Maties have now cemented their lead and title aspirations. Mathematically they could still be overhauled by UCT, Western Province Cricket Club A or Central, but other weekend results - such as Central's defeat to Pinelands - also went their way.