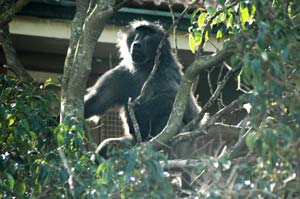 Middle campus' new temporary resident, a baboon called Mike - or is it Simon? - takes refuge in a tree outside the Baxter Hall Residence.

Middle campus has a new temporary resident, a baboon called Mike. Or is it Simon? No-one is too sure which of the two tagged baboons roaming the broader neighbourhood has been foraging from the bins outside the Kopano and Baxter Hall residences lately.

It certainly isn't Bart, who took up temporary residence near the humanities faculty on upper campus last year. But then Bart was darted and relocated to more suitable hunting grounds.

As for the new visitor, Campus Protection Services (CPS) has been keeping a close eye on the hirsute visitor, as have staff of The Nature Conservation Corporation who are following protocols issued by the peninsula's Baboon Management Team. Last Friday, the corporation's staff attempted to lure the baboon into a cage outside Baxter Hall using sliced bread.

But he'd had his fill from the Kopano bins and had taken refuge in a tree outside the Baxter Hall Residence. According to the corporation's Chris Barrett, the baboon comes down to campus in the mornings, sources breakfast from the residence bins and then wanders back towards the mountain in the afternoon.

"He is probably a young male that has reached sexual maturity and been evicted from the troop to ensure he joins another troop - for reasons to do with genetic variation."

What should you do if you come across the baboon? Remember, it is a wild animal. Don't feed it. Keep food hidden. Keep a safe distance. Call CPS on ext 2222 if you experience any problems.