Everson does it all 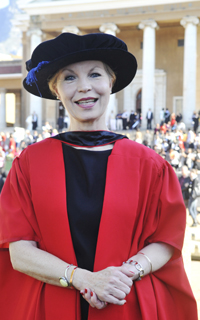 It's been a busy year for Vanessa Everson, who receives her PhD in education on 12 June. Not only did she submit her thesis, but at the same time somehow managed to scoop a Distinguished Teacher Award.

"It's all about commitment," she says. "You have to make your decision, set out your timetable, and not let anything interfere."

A senior lecturer in French in UCT's School of Languages & Literatures, Everson received the award for her work in transforming the teaching of French at UCT, creating "a model for French as a foreign language at tertiary level", according to her citation.

After modernising the syllabus and retraining and mentoring the teachers, she designed courses on French and the media, on the practice of translation, and redesigned the course on teaching business French. She also pioneered a new honours-level qualification, Teaching French as a Foreign Language, the first of its kind in South Africa.

"It also helped that I chose a topic that is closely linked to my day-to-day life as a teacher," she says.

Attending the graduation in support will be Everson's daughter, Camilla, and best friends Lolly, Maudie and Penny, whom she describes as "the sisters I never had".