MA student in the footlights 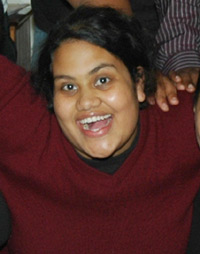 Shapes of Me, a new play by UCT master's student Warda Jabbar, will be presented at the Artscape Arena from 24 June.

A project of the Artscape Audience Development and Education Department and presented in association with ComArt, Shapes of Me uses song and dance to celebrate the diversity and potential of South African youth, and explores how our cultural identities shape us.

Also directing the play, Jabbar is currently working on her thesis in the Department of Religious studies, using mathematics to understand the construction of public and sacred space. She holds a BA Honours from UCT in theatre, film and media.

"I grew up in and around Cape Town, coming from an Arab, English, Indian and Polish-Jewish background, which made family dinners a must for the compulsive debater and rhetorician," she says. "It also instilled a thirst for knowledge, and a passion for reading and books."

During her time spent at UCT's Drama Department, Jabbar formed an appreciation for art and theatre as a social mechanism to deal with the issues around segregation and cultural borders. "I'm also obsessed with mathematics as a form of language to explore patterns in the world in general, and in society in particular," she says.

She draws her inspiration from her brother, and her favourite quote from Steve Biko: "I write what I like."