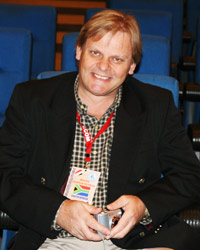 Professor Martin Botha of UCT's Centre for Film and Media Studies is to be awarded the special Ischia Global Award at the 7th Annual Ischia Global Film & Music Festival, held on the Isle of Ischia, Italy, from 12 to 19 July.

Botha was actively involved in research regarding the restructuring of the South African film industry, as well as film policy that led to the creation of the South African National Film and Video Foundation. He also served as consultant for the Western Cape Investment and Trade Promotion Agency regarding the establishment of the Cape Film Commission. He was a member of the Steering Committee of the Cape Film Commission, and was recently named best entertainment blogger on Media24.

Festival producer, Pascal Vicedomini, announced at a Cannes press conference that this year's event will include a special dedication to South African art and cinema, with several South African films being screened. The Cape Winelands Film Festival, in co-operation with the South African National Archives, will present an exhibition of South African film history.

The awards ceremony will take place on 12 July. The event will be chaired by the Academy Award-winning director Paul Haggis, and MC'd by Hollywood manager Jason Weinberg.

Also receiving the award at the festival is acclaimed South African director Regardt van den Bergh, who is responsible for festival favourite Faith Like Potatoes, Hansie and many others.