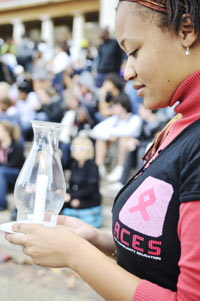 Burning bright: AIDS Community Educator Dandago Uiras tends a candle, lit to commemorate those who have died as a result of AIDS, at the candlelight memorial concert held at UCT on 14 May.

UCT marked the International AIDS Candlelight Memorial with a concert on 14 May, held on the Jammie Plaza.

Rising star Nomfusi and her band, Lucky Charms, took centre stage, the singer sharing a personal HIV/AIDS message. She opened with a song written for her mother, who died as a result of AIDS when Nomfusi was 12.

Acting Vice-Chancellor Professor Thandabantu Nhlapo called on the UCT community to think more deeply about their roles in creating an environment where HIV-positive students and staff "will feel equal in a safe space".

Students' Representative Council president, Chris Ryall, said student activism around HIV/AIDS should be the issue on campus. "HIV and AIDS are as much about social justice and transformation as anything else."