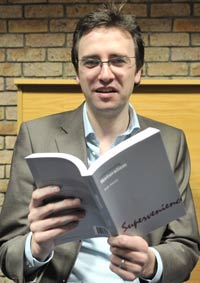 Philosophers who call themselves naturalists want to make philosophy more scientific. But the big problem with a lot of 'naturalised' philosophy is that philosophers have simplistic views about the methods of science and the significance of scientific results, UCT scholar and philosopher Dr Jack Ritchie (in picture) said.

In his book, Understanding Naturalism, launched on 7 May, Ritchie argues: "The general idea of naturalism, that philosophers should learn from science, is good, but it has not been carried out properly."

Ritchie says that many contemporary philosophers label themselves naturalists but that means very different things for different thinkers.

"Some philosophers emphasise the view that the world contains no supernatural entities, while others stress the idea that philosophers need to get out of their armchairs and do some empirical work."

While the book is an introductory text for students, it is also relevant to academics. Ritchie presents his own favoured brand of naturalism, which emphasises our need to pay closer attention to the details of science and scientific practice.

"I have tried to map out the different things that are done by different philosophical naturalists as well as tracing the origin of naturalist ideas in a range of philosophical subjects, including metaphysics, epistemology and the philosophy of language. Along the way, I hope I have shown how some of these ideas can be challenged and improved by looking more closely at science and its history."