For the past 11 years, UCT archaeologist Dr David Braun has braved soaring temperatures and spent many days off-road, travelling through deserts and boulder fields, while conducting research in Northern Kenya. 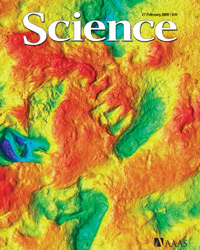 His efforts paid dividends recently when his team of international scientists revealed new evidence - the story made the cover of the 27 February edition of the journal Science - that one of our human ancestors, early Homo erectus, had essentially modern foot anatomy and function.

Fossil footprints provide the only direct evidence of a bipedal gait, but are very rare in the geological record. A lecturer in the Archaeology Department, Braun was part of an international team conducting research at the National Museums of Kenya on a set of hominin (human ancestors and their relatives) and animal footprints at Ileret, in Northern Kenya, that date back 1.51 to 1.53 million years.

They found the footprints in 2005, and it took three years of "painstaking" excavation and analysis to determine that they were, in fact, human prints, and that they were the oldest evidence of modern human gait.

The research team uncovered two distinct sedimentary layers in a single outcrop at Ileret to reveal footprints preserved in fine-grained mud. These surfaces have been dated precisely via inter-bedded volcanic ash layers, and were scanned by the team to create three-dimensional digital elevation models of the prints, accurate to within a fraction of a millimetre. The fossil prints show characteristics typical of prints made by modern humans, including a big toe in line with the other toes, a large and robust heel, a pronounced medial longitudinal arch, and short toes.

"The footprints are a unique snapshot in time, and represent one of the few instances where we can actually see evidence of the foot morphology of our direct ancestor, Homo erectus," explained Braun. 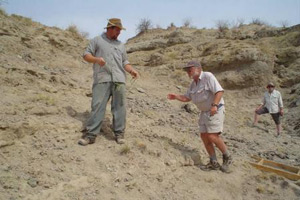 "We have really fantastic evidence of Homo erectus' skeleton, but unfortunately we don't have any evidence of their foot morphology because up until now we haven't found any Homo erectus foot bones.

"The footprints tell us that ancient humans 1.5 million years ago had a foot morphology much like ours, therefore they must have walked in a very similar fashion to us."

Previously, archaeologists had found footprints in Tanzania that were 3.6 million years old, and it appears that over the course of human evolution, foot morphology has changed significantly to allow for more efficient walking.