A-rating for Farrant a first in the natural sciences 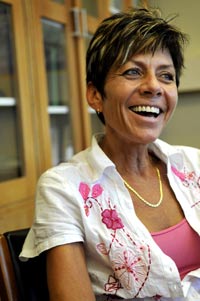 Resurrection plants appear to die in drought but recover dramatically after rain, within 24 to 48 hours, even after a year in the dry state.

These plants have complex "protection" mechanisms, involving the activation of genes that produce protectant chemicals. These switch on as the plants sense their tissues being affected by the dry environment.

Farrant's success - she is UCT's second woman to get a coveted National Research Foundation A-rating, and the first in the natural sciences - came after a time of tragedy.

Last year she slipped on a bath mat, and with the clock ticking, underwent brain surgery for subdural brain bleeding. While the physical recovery was slow, the mental and emotional process was quick. The only permanent damage is the loss of taste and smell. But to top it all, she was burgled at gunpoint while recuperating.

For Farrant the experiences were akin to a rebirth. The news of her A-rating came in December while she was in Madagascar - her first holiday in 12 years - redefining her priorities.

With a PhD from the University of Natal (ironically, on mangrove seeds, which grow in water), she has a raft of medals and awards: best MSc thesis in the country, NRF President's Award (1993), the South African Association of Botanists award for the best PhD thesis in botany (1994).

"But I'm no Einstein. I work with unique Southern African plants, which makes me a big fish in a little pond. I know what I'm good at but I also know I'm not an expert in all the fields. So I collaborate with people who are."

Beyond her laboratory, Farrant has worked tirelessly to establish collaborations in France, Italy, Brazil, Cuba, Hungary, the UK and the US.

Of the world's 300 angiosperm species that show desiccation tolerance, 90% occur only in Southern Africa, under her nose. As a child, she'd noticed one species on the family farm. The plant looked dead but turned green overnight after rain.

Now there is a crop of them in the greenhouse at UCT, some cultivated from the same plant, but also many others - different species with the same "resurrection" ability - collected from around South Africa. Working at subcellular levels, Farrant characterises the proteins and metabolites that protect the plant tissue in extreme conditions. She's also investigating why some plants can switch on their desiccation-tolerant genes and others can't.

Her work has been widely published. What pleases her particularly about the A rating is that the period of NRF review included the years she was head of the Department of Molecular and Cel Biology, when her publication count dropped from between 10 and 15 a year to 8.

But the accolade belongs as much to her colleagues, Farrant says, people who have published and worked with her: Associate Professors Nicci Illing and Wolf Brandt, the late Professor George Lindsey, Professor Jennifer Thomson, and Dr Suhail Rafudeen.