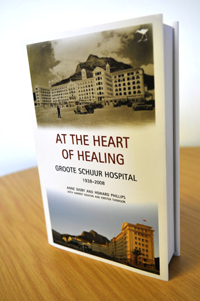 According to Professor Howard Phillips of the Department of Historical Studies and co-author of the title with Prof Anne Digby of Oxford Brookes University, Dr Harriet Deacon and Kirsten Thomson, work on the book began way back in 2005. The authors drew on voluminous archival material and many personal interviews to provide "a rich, probing history of Groote Schuur Hospital, in-the-round and in context".

Phillips recalled an incident shortly after he agreed to the project, where an enthusiastic member of the hospital's steering committee insisted he give a publication date. Not wanting to make any rash promises, he assured the committee member that the book would be out by midnight on 31 December 2008. It was later discovered that the comment was minuted as "the book would be out at midnight on 31 December 2008".

"The book has very great merit, but it is not in the Harry Potter mould," noted Phillips wryly.

At the Heart of Healing provides a new kind of hospital history, described as a "history in-in-the-round" in its inclusive coverage of staff and patients. Phillips points out that the authors took pains to recognise both "beauty sports and warts" in their attempts to provide a balanced history of this landmark hospital.